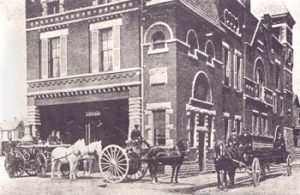 What is now known as Northside was originally home to two tribes of the Miami Indians, the Twightwees and the Pickawillanies. The first wave of European American settlers arrived in March of 1790. Surveys from the late 1700s listed this area as Mill Creek Township. Neighborhood Beginnings Northside has been called many things since the late 18th century. In 1788, John Cleves Symmes, an owner of vast tracts of land in the Northwest Territory, gave the area its first official name, “Millcreek Station.” Two years later Israel Ludlow, a surveyor of the Miami Purchase, built his blockhouse as one of the chain of forts surrounding Cincinnati and called it “Ludlow Station.” When Ephraim Knowlton, who came to the area in 1825 to supervise the digging of a mile of the Miami-Erie Canal, became the first postmaster in 1883, he named the post office “Cumminsville” in honor of his friend David Cummins, a local tanner. In the 19th century, Cumminsville carried a number of nicknames. “Tanyard Gridiron” and “Tannery” referred to the first business other than a tavern to operate here.

It was called “Helltown” during the 1820’s because of the rowdy crews that came to dig the canal. After the Cincinnati, Hamilton, and Dayton Railroad (CHD) was completed in 1850 along Vandalia Street (which veers off Hamilton Avenue to the west at the Hamilton/Blue Rock intersection), “North Side” meant that part of Cumminsville north of the CHD railroad tracks. The name of the community has long been a subject of discussion and debate. As early as 1883, the North Side Transcript, a neighborhood newspaper, reported the controversy. Those living to the north preferred North Side and those living to the south preferred Cumminsville. The original community of Cumminsville was much larger than what is known today as Northside. A large section of Cumminsville, south of Knowlton’s Corner, was cut off from the rest of the neighborhood by the construction of Interstates 75 and 74, and today is known as the neighborhood of “South Cumminsville.” Eventually, “Northside” became the official name for the area bordered by Interstates 75 and 74 on the south, Mt. Airy Forest, on the west, London Village and Buttercup Valley on the north, and Spring Grove Cemetery on the east.The first stores were built at the corner of Hamilton and Spring Grove Avenues by Ephraim Knowlton between 1830 and 1847. By 1930, Knowlton’s Corner was the third largest business district in the county. The shopping district remained popular and busy until the 1960s, when several large manufacturers— and major employers—left Northside. In 1982, the City of Cincinnati designated the Northside Historic District, which stretches along Hamilton Avenue, from the Ludlow Avenue viaduct to Chase Avenue.

HISTORY OF THE ROCKFORD WOODS DEVELOPMENT TO PRESENT

To:       All adjacent neighbors to Rockford Woods Development

I have decided that useful information about the history of the Rockford Woods Development may be beneficial to all adjacent residents as you are forming your opinions about the proposed development.  I personally have been involved in the development as a neighborhood representative in fighting the original development back in 1992, as a technical advisor for the project along with the Hillside Trust, and I have served as a member of the Northside Community Council (NCC) Board for years.  Many of you are new homeowners since the project was reviewed publicly over the past 15 years.  I have tried to address the group opposed to the project via one of your meetings but, for whatever reason, I was not able to do so.  If you have questions regarding any of the points that I mentioned below, please fee free to contact me via e-mail @ timjeckering@fuse.net or 542-2500 @ work.

1).        In December of 1992 the first submittal for what would become known as Rockford Woods Development was submitted to the City of Cincinnati for review.  At that time, the proposed development contained 86 homes that were arranged on new streets that consumed, clear cut, and regraded over 86% of the 24-acre site.  The Building Trades Council based on Chase Avenue was going to turn the site into a heavy equipment training ground for people looking to learn how to operate heavy construction equipment.  The January 1993 approval of the Development was appealed to the Zoning Board of Appeals (ZBA) by adjacent neighbors, some of who many still live in your homes, and NCC endorsed the Appeal.  The Appeal was won by the neighborhood and the project was sent back to the Hearing Examiner.  I was one of the many leaders who successfully lead the campaign for this Appeal.

2).        In January of 1994, a second and totally new redesigned development was again submitted to the City of Cincinnati for review and again it was approved by the City.  This time the development consisted of 72 homes (a reduction of 14 homes) and the site was increased to 28.8 acres as an adjacent parcel of land was added to the development.  The new redesigned development was a result of a compromise that was worked out in conjunction with the Hillside Trust, adjacent property owners, and NCC representatives.  The redesign netted the reduction of disturbed land from the previous 86% clearcuting and regrading to a design that only disturbed 43% of the site, mainly on the ridges, with 56% of the site to remain as undisturbed greenspace and dedicated to be preserved as such.   Development #2 was not appealed by the neighbors, or NCC, and was endorsed by the Hillside Trust.

3).        In August of 1994 Northside Greenspace was formed with the intention of raising money and purchasing the site.

4).        In October 1994, Mayor Qualls formed the Rockford Woods Oversight Committee made up of NCC representatives to monitor the site for compliance with the approved conditions of the Zoning Approval.

6).        In November of 1996, the previously approved Development Plan #2 was revised with a reduction of homes from 60 to 58 homes on 24 acres.  This Plan was approved by the City and the Zoning Approval was not appealed or opposed by NCC, nor the adjacent neighbors.

7).        Between 1997 and 1999 Phase One Street right-a-ways were installed defining the building lots, stormwater, sanitary, and water lines were installed.  The storm water detention basin was also installed.

8).        In May 2001 Development #5 was submitted and revised again reducing the number of new homes again from 58 to 56, the duplex houses included in previous plans were deleted in lieu of all single family homes, and some cul-de-sacs were eliminated.  The adjacent residents did not oppose nor appeal this Zoning Approval, nor did NCC.  In late August of 2001, Citirama opened with the completion of (7) homes.

9).        On January 29, 2005 NCC wrote a letter in support of the New Northside Residents who purchased homes in Phase One of Rockford Woods Development endorsing their request they publicly made at the 1/24/05 NCC General Membership Meeting.  Their request was publicly voted on and NCC agreed to write a letter and partner with them to get the issues resolves regarding the uncompleted development including a Homeowners Association, paved streets without the final layer of asphalt, private versus public streets, utility costs for street lighting, and other misc. items.

10).      From March of 2003 through January of 2004, NCC held (9) public meetings for public input in regard to the Northside Comprehensive Land Use Plan (NCLUP) with paid consultant Liz Blume from the Community Building Institute.  The purpose of the NCLUP was to evaluate all of the zoning throughout Northside due the recently passed City of Cincinnati Zoning Code, and to identify strategic key challenges and opportunities for Northside as we looked forward in our community.  The NCLUP was passed by NCC in April 2005, but was held up at the City of Cincinnati Planning Commission due to complaints by industrial property owners.  After negotiations with the industrial property owners and changes to the recommended Zoning Changes in Northside, NCC again passed the NCLUP in September of 2006, and after City of Cincinnati review by the Planning Commission and Departments within the City, City Council accepted the NCLUP in May of 2007.  The NCLUP was additionally discussed at many NCC general membership meetings, and it was available on-line for review and comment for over two years.  In the NCLUP, one of the three Key Action Strategies within the Create Quality Housing Choices portion of the NCLUP is the completion of the Rockford Woods Development.  In addition, a specific zoning recommendation was made for the Site to be zoned PD-HS (Hillside) in lieu of the City’s original designation of PD (Planned Development).

In conclusion, the Rockford Woods development has consumed countless hours of time from many people within the neighborhood as volunteers with the goal of increasing home ownership while maximizing greenspace through thoughtful planning.  It is my opinion that NCC should honor the existing commitments we made to the new Northside property owners in Phase One, as well as honor the planning process that went into the approved NCLUP.  I would be my suggestion we should not re-vote this issue and maintain the consistency NCC has established over the long-term involvement with Rockford Woods.